Nowadays, people almost expect to see artists wearing iced-out £100,000 Miami Cuban chains in their latest music videos. But how accessible are items like this to members of the general public?

With the rise of the UK urban music scene in recent years, we’ve seen artists a lot closer to home showing off some pretty impressive jewellery, including gold chains, bracelets, rings, watches and more luxurious items.

We take a look at 5 UK rappers that are leading the way with their jewellery collections, and show you how you can source items like your favourite UK artists!

North West London artist Fredo has been known for his impressive jewellery collection ever since he released his first single, “They Ain’t 100”, back in 2016. He owns a vast range of iced-out jewellery, as seen on his Snapchat, but his self-referencing Fredo chain has got to be one of our favourites. With the recent launch of his debut album, “Third Avenue”, and seemingly lots more in the works, we expect to see plenty more additions to his jewellery collection in the near future.

You’ll rarely see Mist without one of his many pieces of jewellery, whether performing at a show, in one of his latest music videos or even just on Instagram. Our personal favourite is his iced-out ‘Sickmade’ pendant that featured in his music video for “Game Changer”; even amongst hot air balloons, speedboats and sports cars, this stunning chain was the star of the show. 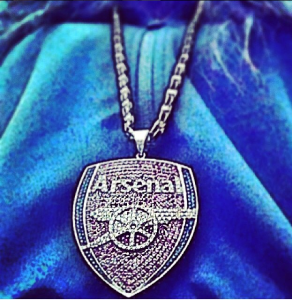 Back after a short period away! Returning with his new music video, shot in Dubai "Pride" - Nines has always been known as someone that loves jewellery, but this was made clear with the release of his “CR (Grills Shutdown)” music video back in 2012. We’ve seen him with a variety of chains and pendants over the years, notably his ICB chain – part of a trio of chains with fellow group members Skrapz and Big Keyz. But the piece of jewellery that he’s most famous for is no doubt his incredible Arsenal pendant, which features countless sapphires, rubies and diamonds.

Big Narstie has been one of the most prominent figures in the UK grime scene for well over a decade, but he’s been making all the headlines in recent years; featuring on Good Morning Britain, BBC Three and even his own TV show on Channel 4, “The Big Narstie Show”. But one other thing that’s worthy of making the headlines is his jewellery collection. Our personal favourite is his BDL pendant, although his iced-out BDL bracelet is pretty impressive too.

Now, Want To Get Your Own?

If you're in the jewellery game, you're going to love this! We have carefully selected the most popular Cuban style Chains & Bracelets within the UK Urban Music Scene. The best thing about these products is the competitive price tag, they are made from an easier, accessible type of diamond which means we are able to import this in to the UK for a much more attractive cost, cutting out additional charges added on by middle men who help source these types of rare diamonds. Meaning, it is very possible for you to own jewellery like your favourite rapper without having to pay a large price tag!

You can find a direct link to the online website here

We’d love to hear which UK artist has your favourite jewellery collection! Why not let us know on Facebook or Instagram ?